Hello! It's been a while, for all sorts of reasons, mostly competing priorities and feeling generally overloaded. I'll try to say something about  that later. But not too much today, I promise.
First though, what do you think about the cricket? I am going to try to post this before the last wicket of the first test falls, because I think the result will have been well earned whichever side wins.  I've given the Youtube vids of Agar's 98 a workout, and I stayed up far too late last night enjoying the second innings contest between the English bowlers and Aussie batsmen. Of course as soon as I did go to bed wickets fell, so an English victory looks more likely right now. You can never tell though. At the very least this beginning augurs well for the rest of the Ashes series.
Some of the commentary has been fun to read as well. I really enjoyed the hell out of the guy who named Broad (quite tongue in cheek) "The Man Who Shot Cricket." Of course it's a batsman's job to defend his wicket as long as possible - it's the umpires' responsibility to determine if he's in or out. The Spirit of the Game code doesn't say anything about whether a batsman should walk or not, but they do have something to say about false appeals by the fielding side, which is why we don't see as  many of those...{dislodges tongue, climbs off soapbox}.
Also, and mea culpa, I know I'm being completely shallow about this, some of the scenery this season makes for particularly easy viewing *g*
It's rugby season down here now, and the Lions have been and gone, but the Bledisloe is coming up, so I revert to Kiwi girl and hope the All Blacks thrash the WannabeesWallabies. You know, the first major rugby game I saw live was when the British and Irish Lions played Southland in Invercargill in 1971? Barry John kicked 10 points and the Lions won 25-3.  It was a typical wet miserable winters day, but we got the afternoon off school to attend (in uniform IIRC, because there was no time to travel home and change): the wind was bitterly cold whipping around our legs, and there was icy rain in our faces.  I still remember that.
Now I have had a thought that might get me active here again. I have a lot of photos from the past 12 months or so, but I haven't shared all that many of them with my flist. So I think that starting now, there'll be a post at least once a month with at least one picture from the same month last year, and maybe a few of the goings on from around then - if I can remember! Here's the first...
July 2012
July wasn't a great month for a number of reasons. By Easter 2012 I'd saddled myself with being president of two re-enactment societies, and a dispute blew up in one of them in late June that was to consume most of the rest of the year. The trigger issue, whether an umbrella organisation that was set up to provide insurance for groups had any role in maintaining authenticity standards, had been brewing for a while. Once it kicked off though, it seemed as though every time we turned around someone was doing their best to escalate things, with petty and ridiculous claims and complaints.  It's all over now, and I'm no longer president of anything (happy sigh), although I'm still on both committees, at least until the end of the year!
This photo of a dingo (can't remember if the watcher was the mum or dad dingo) and pups is from a day out at Featherdale Wildlife Park. A birthday treat from B :) 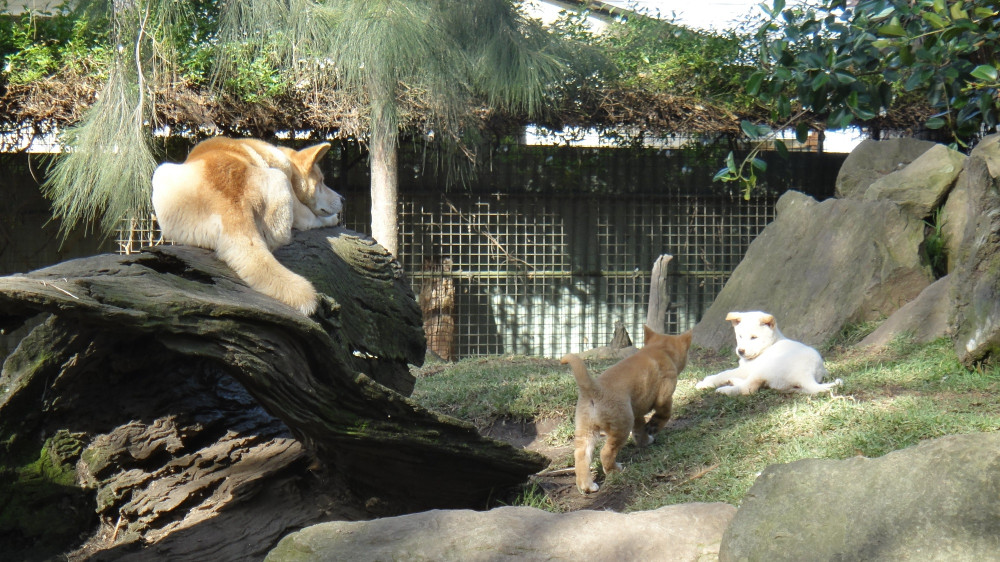